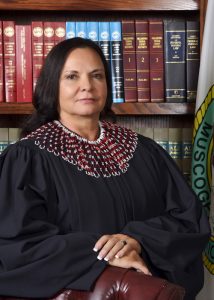 Justice Kathleen R. Supernaw has retired from her private practice specializing in Indian law where she provided legal services for several Oklahoma Indian tribes and non-profit organizations.  Her past work history includes serving as General Counsel for the Principal Chief of the Osage Nation, Special Appellate Tribal Court Judge, and Associate Clinical Professor and faculty member of the University of Tulsa College of Law. There, she also administered a legal clinic for Muscogee (Creek) Nation Legal Program. Prior to her private practice, she worked in Washington, D.C., as a Department of the Interior senior staff expert in Indian affairs and trust reform advising the Deputy Commissioner of Indian Affairs, Assistant Secretary Indian Affairs, and high level Departmental Officials. Justice Supernaw was also an Acting Administrative Judge for the Board of Indian Appeals, Office of Hearings and Appeals, Department of the Interior.

Prior to her assignment to Washington, D.C., Justice Supernaw was a Trial Attorney at the Tulsa Field Solicitor’s Office, Department of the Interior. She appeared in over 30 counties on behalf of the Secretary of the Interior in Oklahoma State District Courts to protect the restricted Indian interests of members of the Five Tribes. Such interests included any type of conveyance, probate and guardianship matters, quiet title and partition actions, and related causes of action. She also served as co-counsel with the Department of Justice in federal court and Departmental counsel in Interior’s administrative forums. She has advised the Bureau of Indian Affairs on such legal matters as tribal ordinances and constitutions, gaming, P.L. 93-638 contracts and self governance compacts, trust land acquisition and realty matters, Indian oil and gas matters, law enforcement, reassumption of contracts/compacts by the BIA, and financial and auditing matters. Lastly, she examined title for the Department for proposed gaming and non-gaming trust acquisitions for Indian tribes and individuals.

Justice Supernaw graduated with Honors from the University of Oklahoma College of Law. While attending University of Oklahoma, she was Editor-in-Chief of the AMERICAN INDIAN LAW REVIEW, on the Dean’s Honor Roll, and a Research Assistant for Dr. Rennard Strickland, Editor of Felix Cohen’s HANDBOOK OF FEDERAL INDIAN LAW. She also has a Master of Arts Degree in Rural and Indian Studies from Antioch University, and participated in the Program for Rural Leadership Development Network at the University of California at Davis. Justice Supernaw has spent her entire career in Indian affairs both working for and advising Indian tribes.  She was nominated and confirmed to the Muscogee (Creek) Nation Supreme Court in May 2010 and is currently serving her second six-year term. Justice Supernaw served as Chief Justice for the 2012 calendar year.