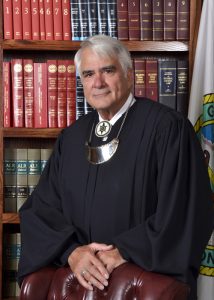 Justice Montie R. Deer has served in various positions throughout his career spanning tribal, state, and federal legal systems. Justice Deer graduated from high school in Whitewater, Kansas. He later earned a Bachelor’s degree in History and English Education from the University of Wyoming, a Master’s degree in Guidance and Counseling from Emporia State University and a Juris Doctorate from Washburn University Law School.

In 1998, Justice Deer was nominated by President Bill Clinton to serve as Chairman of the National Indian Gaming Commission (NIGC) in Washington D.C. and was subsequently confirmed to this post by the U.S. Senate. Justice Deer served in this capacity from November of 1998 to August of 2002. As NIGC Chairman, Justice Deer oversaw the day-to-day operations of the independent federal agency responsible for protection of Indian gaming as a means of generating revenue for tribal communities. After departing Washington D.C., Justice Deer served as the Attorney General for the Muscogee (Creek) Nation.

Justice Deer has many years of experience providing legal education, having both lectured at the National Judicial College and served as an Associate Professor at the University of Tulsa College of Law. Justice Deer has also served as the Director of Legal Services for the North Topeka Indian Center, as a member of the Board of Directors for the Mid-American All-Indian Center, and as a member of the Wichita Warrior Society.