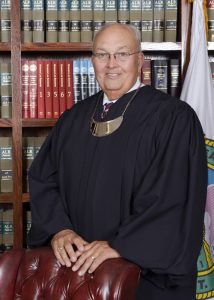 Chief Justice Richard C. Lerblance served as a Democratic member of the Oklahoma legislature representing District 7 from 2002 to 2012. He departed the Oklahoma State Senate in 2012 due to term-limit requirements. As a member of the Oklahoma State Senate from 2003 to 2012, Chief Justice Lerblance served as an Assistant Minority Floor Leader and served on multiple standing committees including Education, Energy and Environment, Judiciary, and Appropriations. He also served on the appropriations subcommittee for Public Safety & Judiciary. Prior to his election to the Oklahoma Senate, he served in the Oklahoma House of Representatives from August 2002 to June 2003.

Chief Justice Lerblance earned an associate degree from Eastern Oklahoma State College in 1967; a bachelor's degree from Central State University (now the University of Central Oklahoma) in 1970; and a law degree from the Oklahoma City University School of Law in 1978. He has practiced law in his hometown of Hartshorne, Oklahoma, since 1979, specializing in oil and gas law, criminal law, personal injury law, social security law, wills and trust law, and divorce and family law. He has previously served on the Hartshorne City Council; the Hartshorne Board of Education; and retired as Fire Chief of the Hartshorne Fire Department. He and his wife, Frances, are members of the First United Methodist Church in McAlester, Oklahoma.